The Ultimate Guide to Blastocystis Hominis

Learn the 3 stages of the gut-restoring

diet, what foods to eat & avoid, how to

pick out supplements and lots more.

Learn the 3 stages of the gut-restoring diet, what foods to eat & avoid, how to pick out supplements and lots more.

What Is Blastocystis Hominis?

You may be asking yourself, what the heck is Blastocystis Hominis?

It sounds like some sort of space creature! And what does it have to do with me?

Well, Blastocystis Hominis (“Blasto”) is a creature, indeed, in the form of a single-cell intestinal parasite that is quite common in both humans and animals. Some estimates suggest that 25% of people are infected with this tiny parasite.

However, many mainstream medical professionals tend to overlook it completely, as they have yet to reach consensus on its relevance, treatment, or even full understanding of the role Blasto plays in overall health. Instead, many of them opt to treat the individual symptoms, rather than the actual cause of their patients’ health issues.

While many of these people claim “the science is still out”, some of us in the naturopathic and holistic realms of healthcare are aggressively researching this parasite and its wide-ranging health affects on the human gut through firsthand clinical practice. In my own experience with thousands of patients over the years, I’ve gathered a considerable amount of data on causes, symptoms and successful treatments for Blastocystis Hominis infection.

This intrepid little parasite has a very hard shell, allowing it to survive outside the intestinal tract or other nurturing environments for long periods of time, even though it’s a water-borne infection. Consequently, Blasto is more easily transmitted than some other pathogens, making it more difficult to control.

Blasto is very often found in contaminated water. People who travel internationally, especially to less developed countries where water systems may not be completely safe, are advised to avoid drinking water other than factory-sealed bottled water or water that’s been boiled to kill Blasto parasites and other bad organisms that may be present.

The Blastocystis Hominis parasite is also frequently transmitted from human-to-human, or animal-to-human through direct contact with fecal matter.

This is one of many reasons that maintaining good personal hygiene is so important. A thorough hand-washing is an easy and effective method for preventing Blasto from invading your body after using a public toilet, petting or touching animals, or being in an unsanitary environment with potential for fecal contamination.

All it takes is one microscopic Blasto parasite to start a nasty ball rolling that disrupts your gut microflora, which in turn has a direct impact on the health of your entire body.

Blastocystis Hominis can also be picked up from swimming in municipal pools, lakes, rivers or other contained bodies of water. Other activities that can expose you to Blasto are boating, camping and any outdoor endeavors that expose you to potentially contaminated water or soil. Having some clean water and soap readily available for washing hands is essential for keeping parasites and bacteria at bay when enjoying the great outdoors.

Another vehicle for Blasto transmission is close contact with people who are ill, which poses an additional risk for family caretakers and health care professionals. Even changing diapers can allow the parasite to invade your body if you happen to touch your eyes, nose or mouth before washing your hands. Blastocystis Hominis is an all-inclusive parasite that lives in men, women and children of all races with equal gusto.

Signs & Symptoms Associated With An Infection

Some of the most common symptoms include:

A few of the less common symptoms are:

Some people can be infected with Blastocystis Hominis for long periods of time before experiencing any symptoms, while others will display symptoms almost immediately after infection. While the duration of symptoms can vary, I’ve seen patients who had exhibited symptoms for more than ten years before finally being properly diagnosed, and subsequently successfully treated.

When Blasto invades your body, it disrupts your immune system, causing it to create all sorts of chemicals that have peripheral health effects all over your body. Your brain, nervous system, skin and all organs are eventually affected and exhibit various symptoms that wouldn’t be immediately or easily recognized as gut-related.

Chronic disease is a progressive process, and much like a ladder, the symptoms tend to build over time to increasing levels. However, every chronic disease has an origin. If we peel back the layers far enough to find the initiating cause of a patient’s health complaints, and then treat that root cause intelligently, all of the other symptoms will usually be reduced and eliminated, as well.

How Is It Diagnosed?

As previously mentioned, mainstream medicine often fails to consider Blasto infection as a factor when diagnosing patients who present with any of the various symptoms that can occur.

To make matters even more complex, the symptoms exhibited as a result of Blasto infection can mimic symptoms of various other health issues, including candida overgrowth and a variety of other gut-related microflora imbalances or invasions.

In my experience, I’ve found that stool testing is the most effective way to diagnose Blastocystis Hominis infection, especially when performing three to four concurrent stool sample examinations on separate days.

Besides identifying the Blasto parasites, a properly conducted stool sample analysis can also identify levels of beneficial bacteria, levels of enterococci and E. coli species present, as well as other troublesome parasites that may be involved.

Since all of these little guys are important factors in determining the best course of treatment, stool testing has shown to be highly effective in finding a well-rounded therapeutic approach that addresses the root of the problem rather than just focusing on peripheral symptoms.

What Treatment Options Are Available To Treat Blasto infection

Due to the as-yet lack of consensus or full understanding of many chronic gut-related diseases, many medical practitioners are quick to prescribe antibiotics for anything resembling an infection.

While antibiotics definitely have their place in treating serious, life-threatening disorders such as pneumonia, meningitis and the like, they are quite useless in treating Blastocystis Hominis infections. Antibiotics, by their nature, are not selective in their attack on the gut microflora.

Rather, they just indiscriminately wipe out all the bacteria in your gut, including the beneficial strains necessary for maintaining a healthy balance of microflora. Consequently, this “collateral damage” allows the bad bugs, like Blastocystis Hominis, candida and other opportunistic little creatures to thrive and take over, causing all manner of health problems, some of which can become serious over time.

Natural treatments are much more conducive to rebuilding beneficial bacteria in the gut and addressing the real root causes of chronic disease for a longterm solution.

If you are experiencing symptoms of Blasto infection or candida overgrowth - both of which share similar symptoms and similar sugar-loving proclivities - an important first step is to adjust your diet. If you stop feeding the bad bug monster, you have a much better chance of getting rid of it.

However, as with most major changes, dietary changes are most effective when done in reasonable stages. If you suddenly just stop consuming all “bad foods”, alcohol and such, you may quite likely feel some withdrawal effects that can make you feel rather awful during that initial period.

A smarter approach is to reduce your intake of these dietary offenders in steps, eating or drinking a less of the “junk” each day, while increasing your intake of healthy foods as you go. If you are committed to regaining your health, you will be able to shift yourself to a truly healthy diet within a week or two without suffering major physiological rebellions associated with sugar withdrawal or feelings of being “deprived”, etc.

Foods to avoid:Foods to eat:

If you’re leading a high-stress life, or even ongoing low-level stress, your immune system is being compromised as part of the body’s natural physiological response to stress. A weakened immune system opens the doors to numerous infections and reduces your body’s ability to fight them. Find ways to reduce your stress to a manageable level.

I have spent over 20 years researching the most effective natural treatments for chronic diseases that emanate from gut imbalances.

Through careful experimentation with various combinations and amounts of the most revered natural materials known to improve gut health, I have found certain formulas to be amazingly effective in not only reversing destructive microflora imbalances caused by Blasto and candida, in particular, but also show impressive results in helping to restore proper gut health more quickly than just dietary or lifestyle adjustments, alone.

The resulting formulas I’ve come up with are CanXida Remove and CanXida Restore.

CanXida Remove is a unique, high-potency formulation developed to treat candida overgrowth, fungal and parasitic infections naturally and effectively. In some cases, patients are seeing relief from symptoms in as little as a few days when combined with the necessary dietary and lifestyle changes.

CanXida Restore is a carefully-blended formulation that contains the seven best enzymes as well as the six best probiotic strains for restoring microflora balance and overall gut health and immunity.

There are several herbal supplements on the market that promise “instant results” for re-balancing gut microflora, killing parasites, fungus and bad bacteria, etc., but my experience has shown these to be far from effective in living up to their claims.

Some of these supplements use many of the right herbal ingredients, but my research has found that the amounts, proportions and methods of manufacture are highly significant to the efficacy of any formulation. Therefore, I can comfortably say that CanXida Remove and Restore are like no other supplement available on the market today, and continue to produce impressive results for many people who have suffered from various gut-related health issues - some for several years.

If you want to feel good again, to improve the quality of your health and therefore your life, it’s up to you to take the first steps. The fastest and most effective path toward this goal is a fully comprehensive approach that includes dietary changes, lifestyle adjustments, and proven herbal supplements such as CanXida.

Learn the 3 stages of the gut-restoring

diet, what foods to eat & avoid, how to

pick out supplements and lots more.

Learn the 3 stages of the gut-restoring diet, what foods to eat & avoid, how to pick out supplements and lots more.

Who is Eric Bakker:

Who is Eric Bakker: 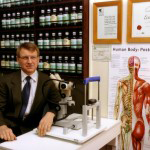 Dr. Eric Bakker (N.D.) is a world recognized gut health & blastocystis expert and the founder plus clinical director of the New Zealand naturpathic clinic known as The Naturpaths.

He is a public speaker & the author of several books including Candida Crusher which he compiled after 32 years of working with over 60,000 patients. He also has a youtube channel with over 1000 gut health related vidoes which you can check out after grabbing the Shopping List report above.

© All material is copyright protected 2011-2018 YeastInfection.Org

Disclaimer: All material provided on the web site is provided for informational or educational purposes only. No content is intended to be a substitute for professional medical advice, diagnosis or treatment. Consult your physician regarding the applicability of any opinions or recommendations with respect to your symptoms or medical condition.

YES, I Want My Blastocystis